André Bihler, one of two professors at the atelier de Didactique visuelle who are involved with the project of creating the “from scrolls to codex” iPad application, and three other students went with Paul Heilporn (Papyrologist) to Biblioteca Medicea Laurenziana (Florence) in Italy in June of 2014 to meet Professor Rosario Pintaudi (Papyrologist).
They were able to view, photograph and film a papyrus scroll belonging to the collections at Biblioteca Medicea Laurenziana, exceptionally well preserved, measuring around 4 meters in length (separate fragments take up about one and a half meters of extra space) and composed of twenty columns. For the occasion the scroll was allowed to be unrolled and then rolled back up, a procedure both exceptional and spectacular because it is extremely rare to witness.

This papyrus scroll, dating from 131/132 A.D., belongs to the collections at the prestigious Biblioteca Medicea Laurenziana in Florence. Composed of twenty columns, it is preserved at its 4-meter length without having been cut into different pieces or put under glass. A light treatment was enough for it to remain flexible and stored rolled up. The scroll is a tax registry that calculates the total amounts collected for the year in the village of Théadephie. Each entry corresponds to a tax with the name of the payer written in large on the first line, followed by the amount to be collected, revealed at the right of the line. The text’s importance also lies in the valuable information that it provides about the village’s population.
Paul Heilporn

We express our deep thanks to the Biblioteca Medicea Laurenziana in Florence and Professor Rosario Pintaudi (Papyrologist) who allowed us to show here several photos and a video recording of the unique experience, as well as Guido Bastianini who welcomed us to grounds of the Istituto Papirologico G. Vitelli in Florence where he acts as manager.
(Click on the images to cycle through them.) 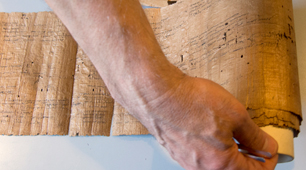